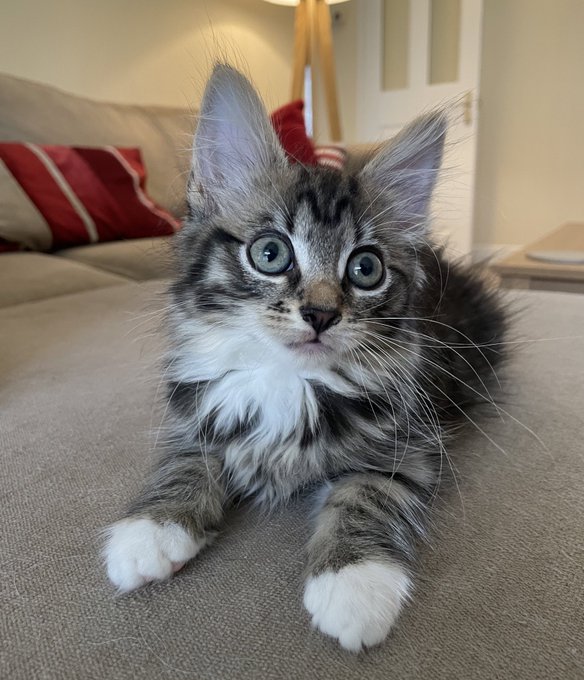 Thor_tabby is topping tweets again on #Caturday on Cats. Within one week, Thor_tabby

Has befriended over a bajillion friends already. One Meow says this is a very little kitten, just wondering, how trending and lucky, the little kitten is.

Imagine and ask yourself why Thor_tabby is trending?

To introduce you to this kitten, – It’s beautiful, with fluffy far like a woolen woven duvet, and angelic white toes, and unimaginable swirls plus round eyes. If you miss the eyes, you can easily pick it up like a woolen duvet to cover yourself. Then you will have picked up the most beautiful kitty kitty for yourself.

1.      Thor_tabby is the most beautiful cat thanks to the comments from #Caturday.

With over 300 retweets, 10 quote tweets, and over 30000 likes, in just a matter of hours. Indeed Thor_tabby is a very beautiful cat.

After all these beautiful tweets, LittleDutchGurl believes that even if Thor is a big name for the little kitten! Thor_tabby fits the fluffy cat.

Michaela Davies, says, lovely Thor, Life is exciting, is it not for a hero like you? Fernando@fernecheNando says, look at that face!!!, if at all Fernando had completed that statement, I am sure he was gonna have to leverage Thor to the sky

Lisa said, Thor_tabby, you’re so cute and look so cuddy Thor! While other kittens say it’s as a beautiful angelic kitty. Aww, thor buddy from Gorgeous kitty. That kitty is adorable @SusanIsSicOfGOP.

The kitten rejoices how she woke up her supper, she starts by licking and purring. Cats are fond of playing but Thor­­_tabby takes it even further by waking up his master.

It is believed that if a cat licks you then, then it thinks you are its mother As Benny Golson told me, “We all start off sounding like other cats. And gradually, a lick here or there, we start to sound like ourselves. But it takes a long time to do so … “

Other friends to Thor_tabby include bringing back Decency which is seen wrestling with a pug. Renee GS always gets a paw in her face and lots of purrs. She claims that Mika wants her awake.

That kind of fluffiness is only got by Maine Coonies, everybody is wondering which clan or tribe Thor_tabby is. CorvonUhl believes that Thor_tabby is a Coonand that he has ever had 2 Maine coons, Beverly and Barnabas.

However, Thor_tabby says he is just a long-haired tabby! Sqiud89_93 aka “just call me Crazy” has got a thing going, she confesses she confesses how she likes the gorgeous fluffiness and she is a sucker for it.

See you again in another episode where we discuss Thor_tabby again among the 7 most unique fluffy kitties in the world #Caturday.